The Office of the UN Resident Coordinator in Kazakhstan and the Ministry of Foreign Affairs of the Republic of Kazakhstan organized an online round table on the topic "30th Anniversary of the closure of the Semipalatinsk nuclear test site: impact on global development, peace and security", Delovoy Kazakhstan reports.

The event was attended by political and public figures of Kazakhstan, representatives of the diplomatic corps and international organizations accredited in Kazakhstan, as well as experts and university students.

In her welcoming speech, UN Resident Coordinator Michaela Friberg-Storey noted the important role of Kazakhstan in nuclear disarmament and non-proliferation, stressing that the closure of the Semipalatinsk test site was an important stage in the development of the global anti-nuclear movement, and Kazakhstan has become an example for many in the non-proliferation of nuclear weapons.

Director of the International Security Department of the Ministry of Foreign Affairs of Kazakhstan Kairat Sarzhanov noted the great political significance of the closure of the Semipalatinsk test site at the dawn of independence and highlighted a number of subsequent initiatives of our country aimed at promoting peace and security on a regional and global scale.

"Speaking at a session of the UN General Assembly, President of Kazakhstan Kassym-Jomart Tokayev said that building a world free of nuclear weapons is a priority for Kazakhstan, an integral part of the national identity of the Kazakh people, which has given the moral right to be at the forefront of the nuclear movement for the elimination of nuclear weapons" , - the diplomat emphasized.

In addition, he said that on the day of the signing of the Semipalatinsk Treaty, the Ministers of Foreign Affairs of the Central Asian countries adopted a joint statement on the occasion of the 15th Anniversary of the signing of the CANWFZ Treaty, in which, in particular, they reaffirmed their commitment to a peaceful and secure world free of nuclear weapons, expressed their interest in in expanding partnerships with existing nuclear-weapon-free zones.

In the speech of the former Minister of Foreign Affairs Akmaral Arystanbekova, it was emphasized that the historical contribution of Kazakhstan, which closed the Semipalatinsk nuclear test site by the Decree of the First President of the Republic of Kazakhstan N.A. Nazarbayev, the subsequent accession to the NPT as a non-nuclear state and the voluntary renunciation of the inherited weapons, commanded deserved respect and trust in our new independent state in the world community, which she witnessed over the years as the first Permanent Representative of Kazakhstan to the UN.

Great interest of the event participants was aroused by the speech of the statesman and public figure, diplomat Olzhas Suleimenov, who spoke about the history of the creation of the world's first anti-nuclear movement "Nevada-Semipalatinsk". The sad periods in the history of Kazakhstan clearly illustrate that nuclear weapons and the consequences of their testing are incompatible with the prosperous and secure future of all mankind. 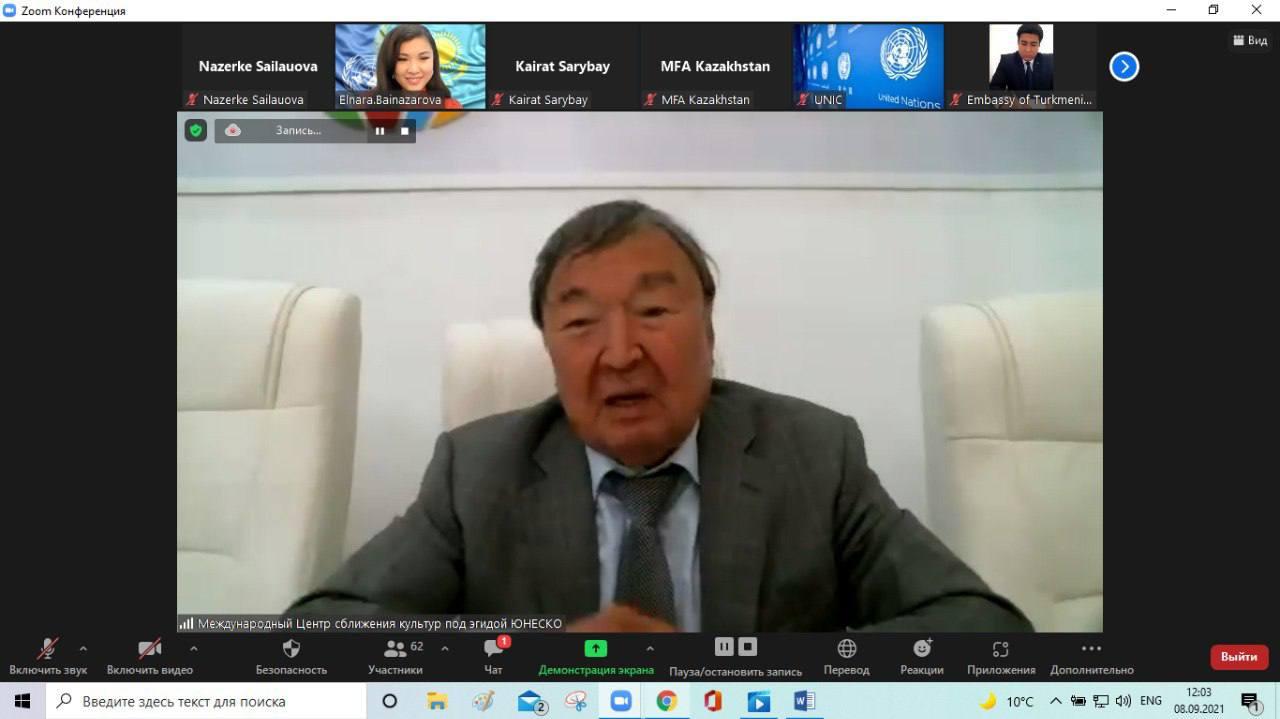 Executive Director of the Secretariat of the Conference on Interaction and Confidence Building Measures in Asia (CICA) Kairat Sarybay noted that the CICA forum, initiated by the First President of Kazakhstan Nursultan Nazarbayev, attaches great importance to global nuclear disarmament and strengthening security in the CICA area of ​​responsibility. In the Almaty Act of 2002, the leaders of the countries participating in the Conference recognized that disarmament and arms control, the universality of all international treaties related to the elimination of weapons of mass destruction, and the promotion of non-proliferation are important for building confidence among the states of the region.

The participants of the event noted that Kazakhstan has demonstrated its political responsibility to the world community and a model of partnership with the leading nuclear powers based on mutual trust.

Dr. Robert Floyd, the Executive Secretary of the Comprehensive Nuclear-Test-Ban Treaty Organization, and Beatrice Fihn, the Executive Director of the International Campaign to Abolish Nuclear Weapons (an organization that received the Nobel Peace Prize for its work to draw attention to the catastrophic consequences of any use of nuclear weapons and for efforts to achieve a legislative ban on such weapons), also addressed the participants with video messages.

Within the framework of the round table, the participants were shown a thematic video dedicated to the tragic pages of the history of Kazakhstan - the consequences of nuclear tests at the Semipalatinsk test site.