The main qualifying competition for the Winter Olympic Games was the 2021 World Championship, held in March in Stockholm. Kazakhstani skaters at this start could not win Olympic licenses. The correspondent of Delovoy Kazakhstan tried to find out whether the domestic masters will have time to qualify for the 2022 Winter Olympic Games in Beijing.

At the world championship in the capital of Sweden, the only participant from Kazakhstan was 17-year-old Almaty resident Mikhail Shaidorov, who took the second-to-last 32nd place in men's singles. But it was here that almost all the Olympic licenses in Beijing 2022 were drawn.

The absence of the World Championship medalist, 21-year-old Elizabeth Tursynbayeva, was a huge loss for the Kazakhstan national team. After winning the medal in the spring of 2019, she suffered from old injuries.

Because of them, she was forced to refuse to participate in the CS Lombardia Trophy in the fall of 2019. Later, our heroine will win a silver medal at the Shanghai Trophy, but she will no longer be able to participate in Skate America-2019. Since then, Tursynbayeva, unfortunately, has not competed in official competitions. Fans could see her with show numbers only at ice shows.

Also, for a long time, our dance couple Maxine Veterbi and Temirlan Yerzhanov did not go to the starts. As we managed to find out, the guys are also healing trauma.

“Elizabeth Tursynbaeva is injured and most likely will no longer skate, the dancers are injured. It will be a big problem for Kazakhstanis to qualify for this Olympics, ”said the judge of the international category ISU Yuri Guskov.

By the way, the head coach has changed in the national figure skating team. Kuralai Uzurova, who has devoted 17 years to the development of this sport as a head coach, left this post, deciding to devote more time to her family. Now the team is headed by Sergey Voronov.

Is there a change?

For junior skaters, the season has already begun. At the recent stage of the Junior Grand Prix in Kosice (Slovakia), 17-year-old Kazakhstani Dias Zhirenbaev managed to show the best result in his career in the free program and on the sum of the two programs. The scored 168.97 points allowed him to take the honorable 9th place. And thus he became the leader of the national team - the best result of Mikhail Shaidorov at the moment is 164.09 points. 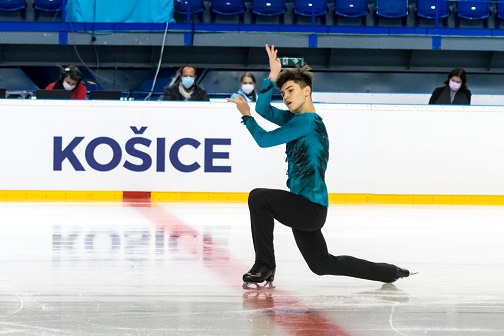 A guy from Taraz now lives in Nur-Sultan and wins the hearts of his peers and good marks from the jury at competitions.

This season, Diaz skates in the short program to the music of "Iron Sky" by Paolo Nutini, and the performance program to the soundtrack from Aladdin "Friend Like Me".

Zhirenbayev has been performing at the Junior Stages since 2018 and progress is evident. Now it was on him and on Mikhail that the responsible mission fell - to try to win the only license in Beijing 2022 at the Nebelhorn Trophy 2021 tournament in Germany.

According to the ISU, athletes from 32 countries, including Americans, Russians, Koreans, will participate in this important competition, and who will ultimately receive the only remaining ticket is a mystery to the most prominent forecasters.

Among women, 15-year-old Almaty woman Bagdana Rakhishova will compete for the only remaining ticket to Beijing-2022 at the Nebelhorn Trophy 2021. At the stage of the Junior Grand Prix in Kosice, she took 22nd place, also showing her best results both in total (102.58) and in each of the programs separately.

At the Junior Grand Prix stage that starts on September 15 in Krasnoyarsk (Russia), another Kazakhstani will perform - 14-year-old debutant Oleg Melnikov, his turn to fight for Olympic licenses will come very soon.

The Astana Ballet Theatre draw a round of applause in Turkestan

Tianjin plays host to 'A Date with China' media tour