A little less than 5 months are left before the start of the 24th Winter Olympic Games in Beijing. Athletes performing in winter sports are preparing with might and main for the start of the main starts of the four-year period - already on February 4, 2022, the Olympic flame will be lit again over the national stadium of Beijing "Bird's Nest", symbolizing the beginning of the competition!

The Kazakhstani national freestyle mogul ski team is preparing to show its maximum at the Beijing Olympics. To come fully armed, the head coach of the team Elena Kruglykhina invited the Olympic champion in hurdles race Olga Shishigina to the next training camp in Almaty, who gladly conducted training in her track and field discipline for freestyle mogulists, Delovoy Kazakhstan reports.

For our freestyle mogul team, this is not the first experience of a close acquaintance with other sports. Earlier, the Mogulists began to practice, in addition to the main activities, Pilates and the game of hockey. By the way, the silver medalist of the Winter Olympics Elena Khrustaleva became the Pilates mentor for our Mogulists. Olympic champion Olga Shishigina is responsible for a new type of activity for freestylers - hurdling.

We talked with the head coach of the national team Yelena Kruglykhina about summer training and preparations for the Beijing 2022 Olympics.

- How did you come up with the idea to offer the Mogul ski freestyle team to master hurdling?

- Athletics has always been in our training, we decided to expand our knowledge, since this kind of sport is not a core sport for us. Friendship with Olga Vasilievna Shishigina and her opportunity to devote time to us in July gave more opportunities. She shows us her individual exercises and the amount of load for professional athletes. Such training allows us to develop speed endurance. The mogul trails are getting harder, the speeds are higher, and without endurance it is difficult to fight for high places.

- Previously, the national team was engaged in Pilates and hockey ... Does this practice continue now?

- Pilates is an integral part of the technique, and game types develop coordination, ice hockey makes not only muscles work, but also the head. 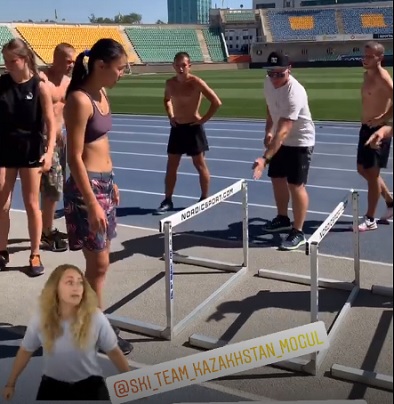 - What are the team's plans for the time remaining before the start of the World Cup? When is it expected to go out on the snow?

- Now we are waiting for a visa. While training in Almaty, then we fly either to Austria or Switzerland on the snow, depending on where the weather and the state of the snow allow to build a full-fledged track. In December this year, 3 stages of the World Cup will take place at once. Traditionally, the first stage will take place in Finland (Ruka), followed by Sweden and France. We will spend the New Year in Canada, we will need to acclimatize to the time zone, because on January 7, the Canadian - American stages of the World Cup begin. Then will be 2022 Olympics. This season before the Olympic Games there will be 10 stages of the World Cup, this is a record. After Beijing we will have two stages in Japan and Russia and the World Cup final in our native Almaty on Shymbulak on March 12-13.

Let us remind you that the freestyle mogul team of Kazakhstan is one of the strongest in the world in its sport. At the World Championship held in Almaty in March 2021, our mogul masters confirmed this again. In the Olympic discipline - single mogul, the silver medal was won by Yulia Galysheva, and the bronze - by Pavel Kolmakov. Young Anastasia Gorodko won bronze in a parallel mogul. Moreover, since 2015, Kazakhstan has necessarily won at least one medal at the World Freestyle Mogul Championships, and Yulia Galysheva won the bronze medal at the 2018 Winter Olympics.