On May 9, 2022, the Embassy of the Republic of Kazakhstan in the Islamic Republic of Pakistan together with the Centre for Global and Strategic Studies in Islamabad, organized an online roundtable dedicated to the 30th Anniversary of the establishment of diplomatic relations between Kazakhstan and Pakistan, Delovoy Kazakhstan reports. 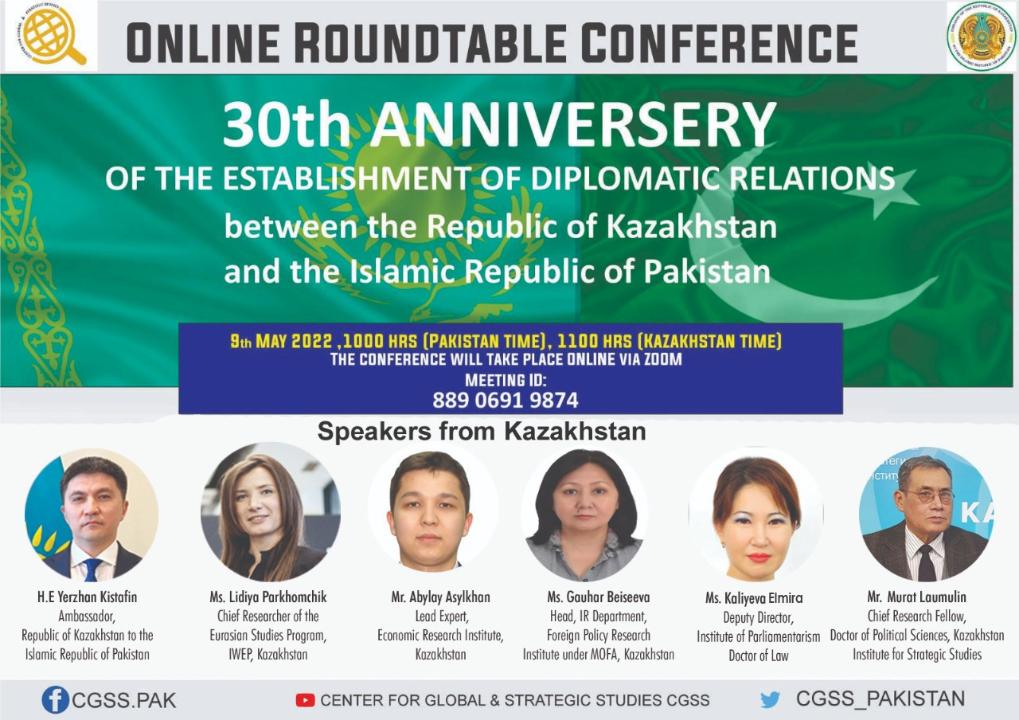 The event was attended by 30 representatives of expert circles of leading Kazakhstan and Pakistani scientific and analytical centres. 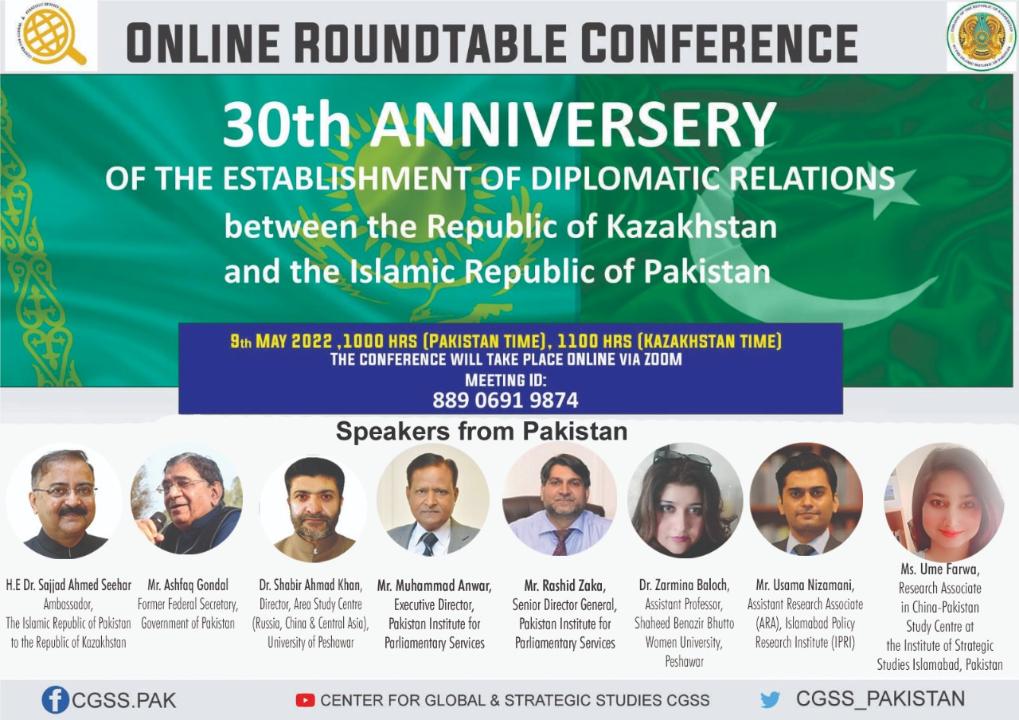 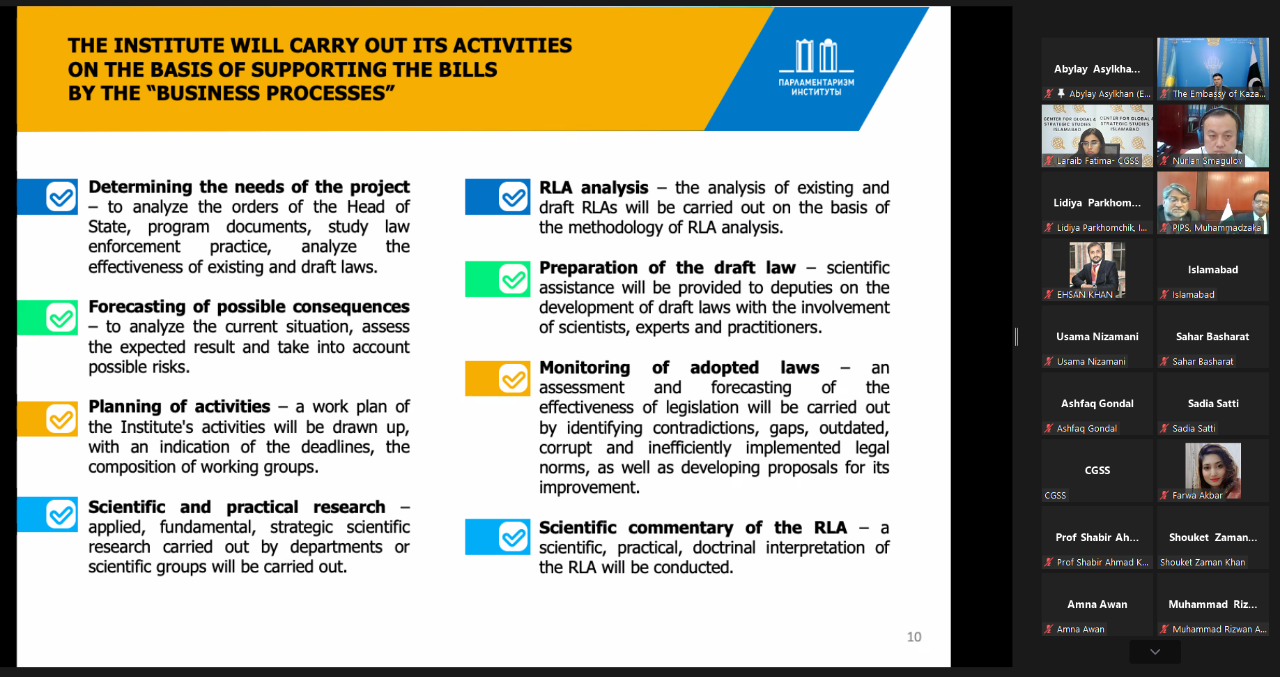 The leading Pakistani think tanks like the Institutes of Regional, Strategic Studies, the Study of International Relations, Economic Development, Parliamentary Service, the Eurasian Century Institute, and the Regional Research Centre of Peshawar University took part in the roundtable. 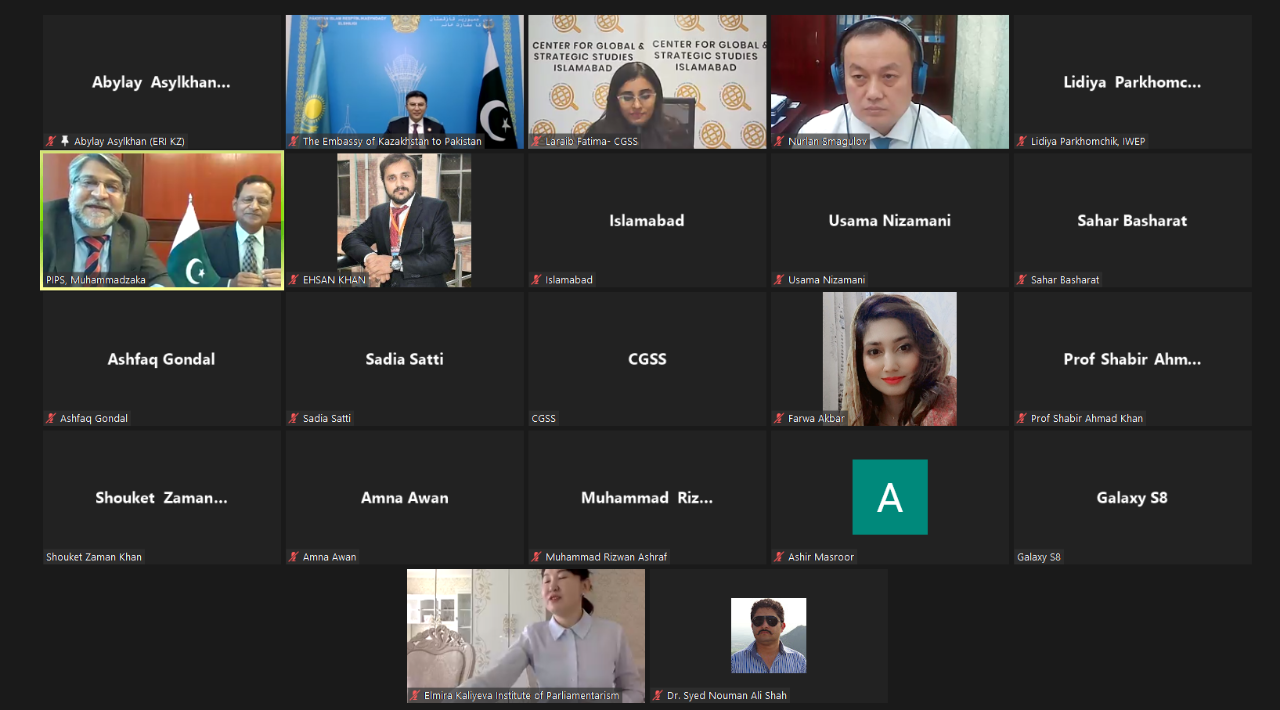 At the beginning of the event, the participants of the round table were greeted by the Ambassador of the Republic of Kazakhstan to the Islamic Republic of Pakistan Y.Kistafin. 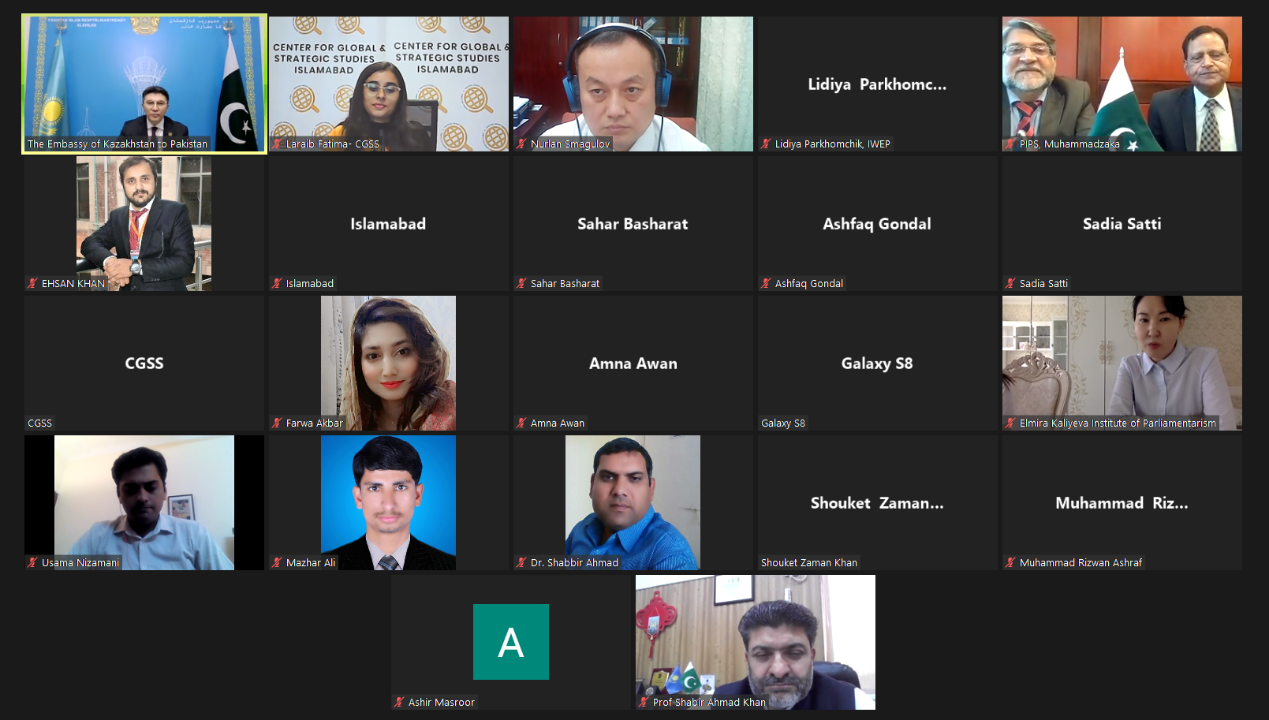 In his speech, Y.Kistafin highlighted the key milestones in the development of bilateral cooperation, the main factors of intensifying cooperation in the political, trade, economic, cultural and humanitarian spheres. The Ambassador paid special attention of the participants to the political changes taking place in Kazakhstan and Pakistan. 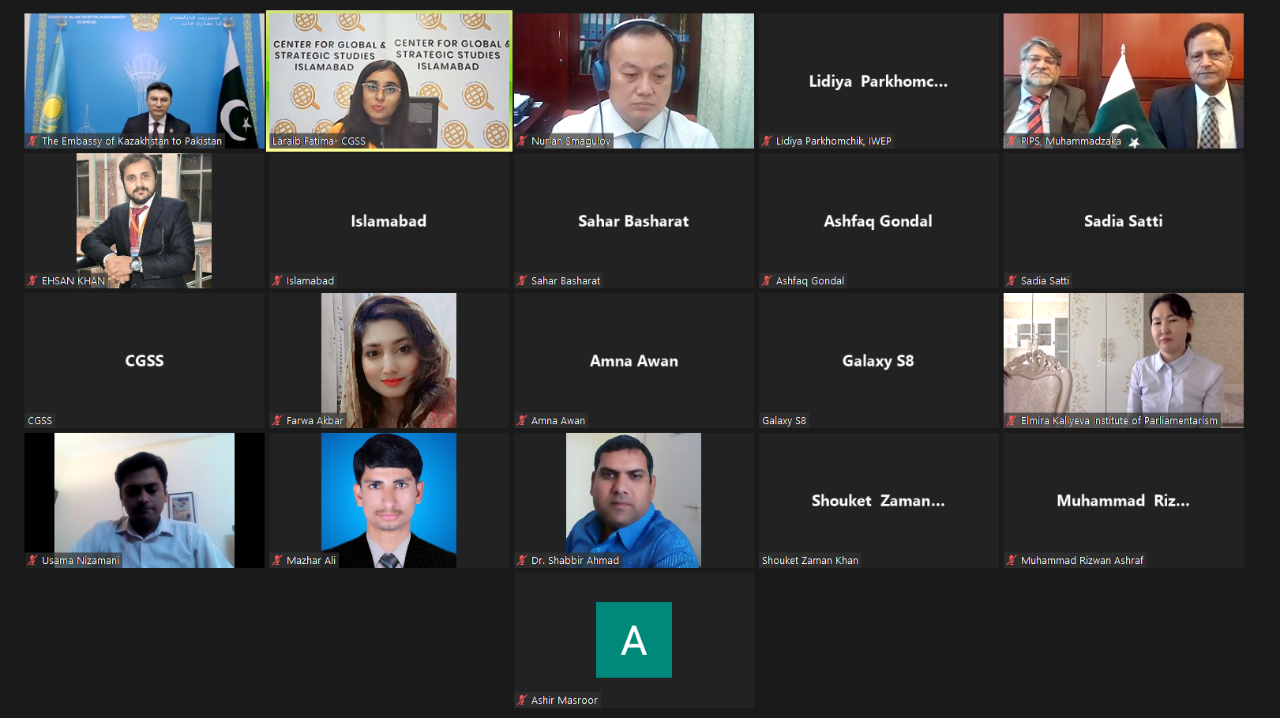 He also spoke about the measures implemented by Kazakhstan’s leadership aimed at strengthening the role of the Parliament of the Republic of Kazakhstan, ‘maslikhats’ (a local representative body), diversification of political space, strengthening the dialogue between the state and society. He informed the participants about the upcoming referendum on June 5 this year on the proposals of the President of the Republic of Kazakhstan K. Tokayev on amendments to the Constitution of the country. 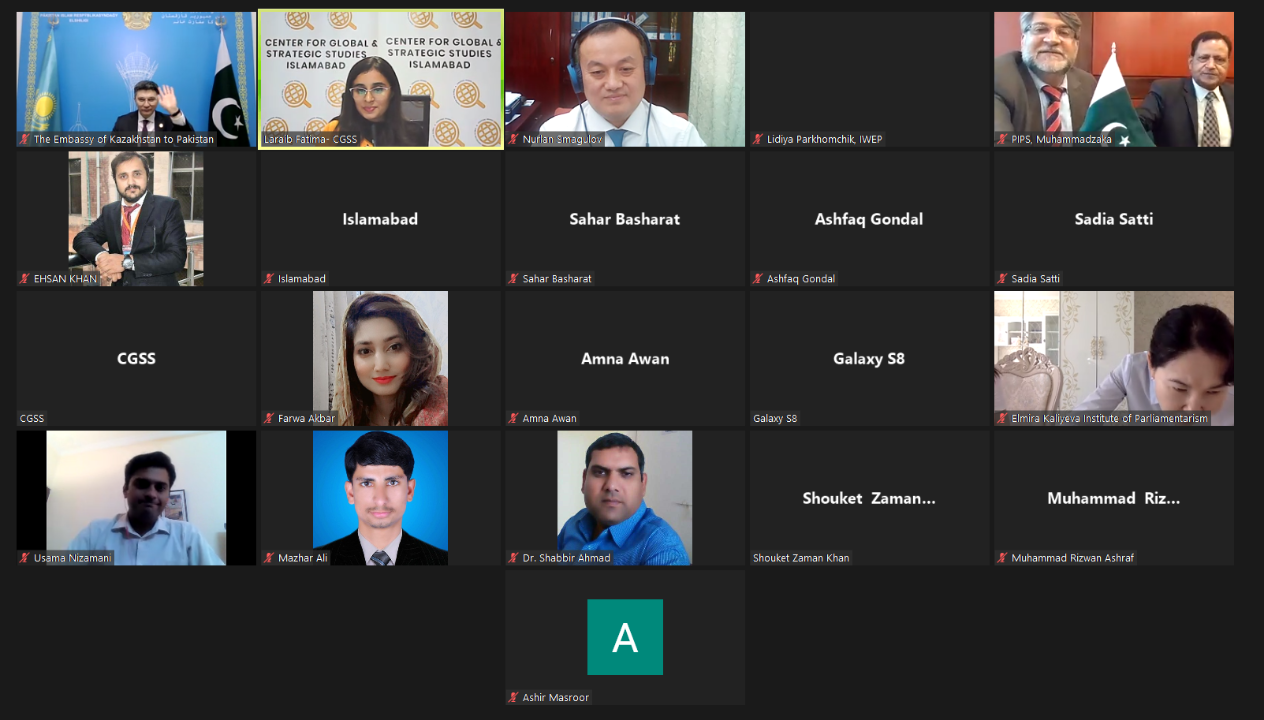 As for the change of Government in Pakistan, Ambassador expressed hope for the continuity of Islamabad's foreign policy in terms of further strengthening cooperation between our countries.

The main results of thirty years of cooperation between the two countries were summed up, and the key factors preventing the expansion of cooperation were discussed. The participants of the Round Table paid a significant place and role to the development of the so-called "people's diplomacy".

As for the regional context discussion, the issues of ensuring security and stabilizing the situation in Afghanistan were touched upon. The implementation of these issues would be the pledge of successful cooperation between the regions of Central and South Asia.

While considering the issues of inter-parliamentary cooperation, the parties presented a vision of interaction prospects between the legislative bodies of the two countries, noting the potential of parliamentary diplomacy in solving interstate matters.

Following the results of the round table, the parties stressed the importance of holding such events on a regular basis and establishing direct contacts between the leading think tanks of Kazakhstan and Pakistan.