BEIJING, May 23 (Xinhua) -- This year marks the 100th anniversary of the Communist Party of China (CPC). Over the 100 years since its founding, the CPC has navigated China, the world's most populous country, towards a path of rapid development, having achieved admirable success that has earned global respect. 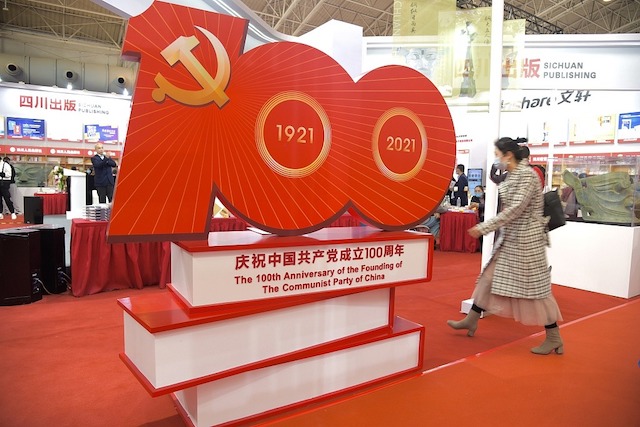 Party leaders and senior officials of different countries recently expressed appreciation for China's achievements, noting that China's success, a result of the CPC's strong leadership and a right development path, offers significant inspiration for other countries in pursuit of their own development.

"The whole world might not imagine that a huge country like China would develop into the world's second largest economy in just over 40 years. This is a very remarkable achievement," said Somsavat Lengsavad, former Lao deputy prime minister and former politburo member of the Central Committee of the Lao People's Revolutionary Party.

The wise and strong leadership of the CPC is the decisive factor for the achievements, he said.

"In my opinion, the Chinese miracle is mainly due to the leadership of the CPC because they found a model of development in this dynamic world," which is socialism with Chinese characteristics, said Alexandar Paunov, first secretary of the Bulgarian Communist Party, when commenting on "the Chinese miracle."

Raed Fahmi, secretary of the Central Committee of the Iraqi Communist Party, said that socialism with Chinese characteristics is a huge historical experience, which his party is keen to study and follow up.

In each stage of the CPC's history, "there have been capable leaders, taking the lead from the party to drive each stage and accomplish goals," said Hector Aleman, secretary of international relations of Panama's ruling Democratic Revolutionary Party.

Najm al-Deen al-Kharit, secretary-general of the Unified Syrian Communist Party, said that he had visited China twice, and was impressed by China's development, especially the construction of buildings and the improvement in people's livelihood.

Al-Kharit is not the only one who has been impressed by how China has brought tangible benefits to its people with rapid development.

"The secret behind China's ability to control the pandemic lies in putting people's health first," said Adham Sayed, member of the Central Committee of the Communist Party of Lebanon, highlighting the CPC's dedication to the well-being of the Chinese people during the pandemic's darkest hours and beyond.

"If a party wants to survive, it must put the interests of the people first, which is what the CPC has done throughout its march," Sayed said.

Impressed by China's technological achievements, former Hungarian Prime Minister Peter Medgyessy, said, "The quality of life in China has also changed a lot, and this is perhaps even more important than technical progress."

"The success of the party is based on two things, one is that it has represented a stable set of values that can be maintained in the long run, and the other is its very good ability to renew itself," Medgyessy said.

Mahdi Dakhlallah, a leading member of Syria's ruling al-Baath party, said that the notion of "putting the people first" has pushed China forward.

Adan Chavez, vice president of the United Socialist Party of Venezuela, visited China four times between 2017 and 2019. He said that the CPC is a pillar of the scientific and technological development made by China, and achievements attained by its people are not only a "role model for the rest of the world, but a symbol of hope."

"We have witnessed how the Chinese people have rendered huge support for their government and the CPC while working together in keeping with principles of socialism with Chinese characteristics," he said.

Referring to the third volume of "Xi Jinping: The Governance of China," the senior Venezuelan party official said the book portrays steps to be taken to succeed in the construction of socialism and a new vision of the Chinese leadership.

He said that China is an inspiration for nations fighting for freedom and sovereignty, adding that the huge progress made by the Chinese people is a clear proof that socialism is an effective solution "to the problems affecting humanity."

As a century-old party, the CPC has always kept pace with the times and innovated continuously, said Sofia Carvajal, secretary of international affairs of Mexico's Institutional Revolutionary Party, adding that in this regard, her party can learn from the CPC to continuously innovate, develop, and adjust itself to people's changing needs, so as to gain public support.

Medgyessy also noted that China's fast development has created opportunities for markets and investments on a global scale, and China's impact on the world has been "very significant."

China's reform and opening-up is important experience for other countries, including Belarus. "There are a lot of interesting things in the socio-economic development of China, which today I see as very relevant for our country," former Belarusian Deputy Prime Minister Anatoly Tozik said.

"The growth of China's power and its economic strength is not a threat to humanity, but an additional chance for everyone to overcome today's terribly difficult time and terribly difficult period in the life of human civilization," he said.